We wrote the Control Software for the Gantry and Safety Nets

Cirque du Soleil's production of KA at MGM Grand in Las Vegas is a truly thrilling experience. KA is the epic saga of Imperial Twins who embark on an adventurous journey to fulfill their destinies. The Sand Cliff Deck is the main performance space, and accompanies the twins throughout their adventure, emerging from the depths of the theatre and transforming into several landscapes, including rugged mountains and a vertical battlefield. A backstage production is performed by Delta Tau and Tisfoon Ulterior Systems, by providing 24-axis motion control technology with nanosecond capability that moves the Sand Cliff Deck and safety nets into position throughout the production. 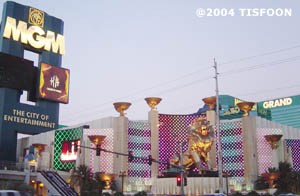 The Sand Cliff Deck measures 25x50 feet with a six-foot depth and is supported and controlled by an inverted gantry crane. It weighs 150-tons and rises 70-ft. at the rate of 2-ft/second from the depths of a two-story basement. The Sand Cliff Deck is capable of tilting up to 100-degrees at 2-degrees/sec. 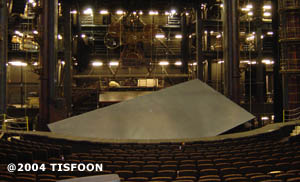 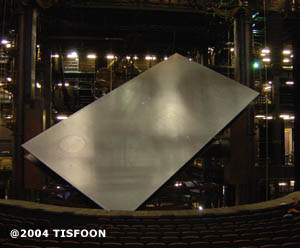 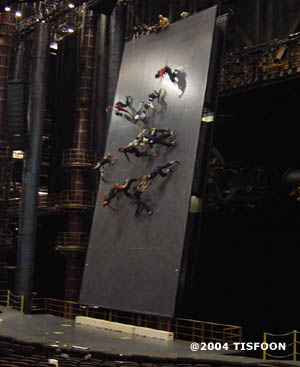 The control of this massive structure that weighs as much as a Boeing 757 was especially a challenge. With the 12 inch diameter hydraulic cylinders (5 inch rod) mounted rod side down, the stage rides on an increasingly larger column of oil as it travels to the top of its stroke. Over the 70 foot travel span, the physical characteristics of this column of oil change. The larger column of oil, turns more and more into a spongy spring. For this reason, the proportional gain was set especially low. To compensate for the low proportional gain, Integral gain was used during motion. However, with changing physical characteristics over the travel span, fixed P and I values could not be used. A plc was written to dynamically change the P and I values based on the the height of the stage. Additionally, the I value was further increased during the deceleration portion of the profile to act as dynamic brake. The dynamic gains overcame the 1.6 Hz natural frequency of the structure providing smooth motion with accurate (0.1 inch) positioning. 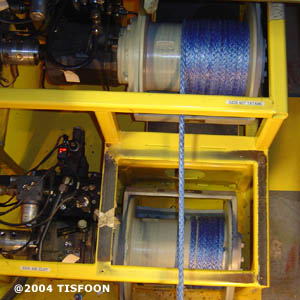 Load balancing was another issue that needed to be addressed. The 4 hydraulic cylinders are split such that one pair control stage left and another pair located 60 feet apart control stage right. Each pair at either side of the stage is further split into an upstage and a downstage component. Design criterion requires that the load be equally balanced between the upstage and downstage cylinders. A plc closes the load cell loop dynamically delaying or accelerating the upstage motion profile to balance the load cell reading of the downstage cylinder. 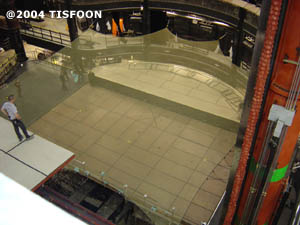 The control system is kept in open loop when the stage rests on the mechanical brakes. Pilot activated hydraulic blocking valves are additionaly used as a safety backup to the mechanical brakes. Transitioning the massive 150 ton stage from open loop brakes applied to closed loop motion control was another challenge. A custom algorithm controls the closed loop charge up of the cylinders. The custom algorithm running in a plc applies hydraulic pressure to each cylinder while monitoring the cylinder's pressure transducer as feedback. When all four cylinders indicate enough pressure required to hold the stage up, the mechanical and hydraulic brakes release and closed loop control commences. Fine tuning this transition at different heights, with different columns of hydraulic oil, required attention.

Safety played a major role in the mechanical, hydraulic, and software design. The size of the stage combined with the high (2 ft/sec) top speeds are not typical in a traditional motion control application. Certainly a structure like that cannot be stopped with no deceleration. Typically, in a following error or amplifier fault condition, motion controllers immediately cancel control and put out zero volts. In this project, this action would result in serious injury to actors and the mechanical structure. To avoid a sudden command voltage of zero volts, a high speed plc detects the immediate stop condition and ramps down the analog signal to zero volts gently.

Tisfoon Ulterior Systems was also entrusted with the programming of the 18 hydraulic winches controlling the 2 safety nets. During KA, performers intentionally fall from heights of up to 60-ft. into two safety nets controlled by 18-hydraulic winches. To aide in the programming of the 18 winches, we used our Code Generator product and its template feature to create an object oriented framework within the Delta Tau programming language. This tool proved highly valuable for the reliability and maintenance of the final code. To deploy the safety nets, the operator first moves the winches to a target position. From that point, the winches are placed in tension mode and closed loop tensioning brings the safety nets to their required state. 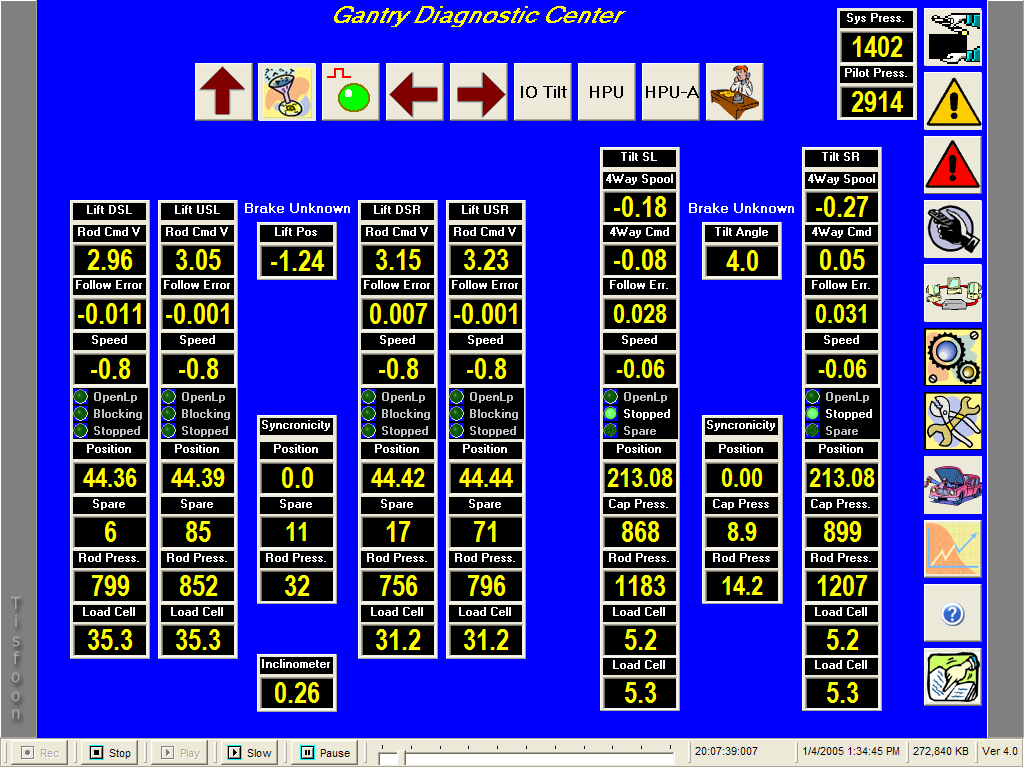 The overall show automation is handled by Stage Technologies' Nomad. The Nomad controller is the show operator's direct interface and broadcasts position, velocity, acceleration, and timing messages over ethernet in UDP format. Traditionally, the Nomad sends these messages to a Seimens plc. However, Tisfoon Ulterior Systems' HMI running on their 1.6GHz PC104 with dual RAID hard drives receives and translates these commands into commands that can be sent to their software on the Delta Tau controller. This makes the Delta Tau look and feel like a Seimens controller. Furthermore, Delta Tau's automatic motion blending technology easily accomodated the speed override wheel of the Nomad controller. 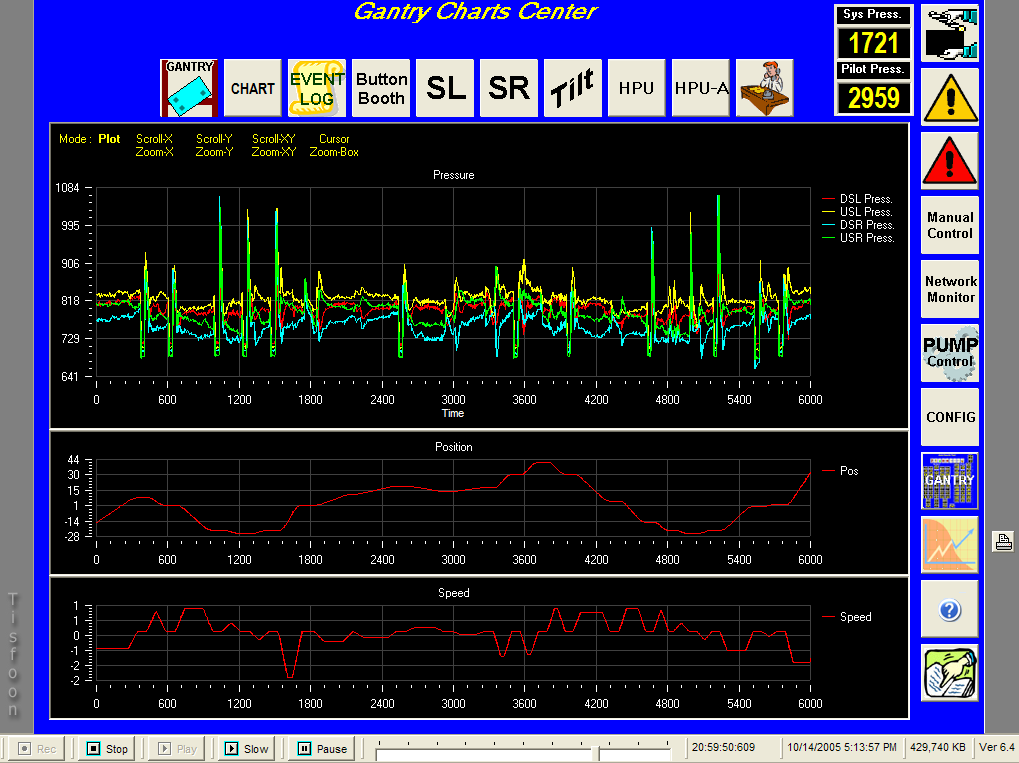 Tisfoon Ulterior Systems' HMI has an innovative VCR feature allowing it to record and playback diagnostic information every 1/10th of a second. VCR "tapes" are archived and saved for every 24 hour period. There are two shows per night and each show's revenue is $300,000. If there are any malfunctions, the VCR will record and document it. The good news is that the system has proven reliable and robust to date.